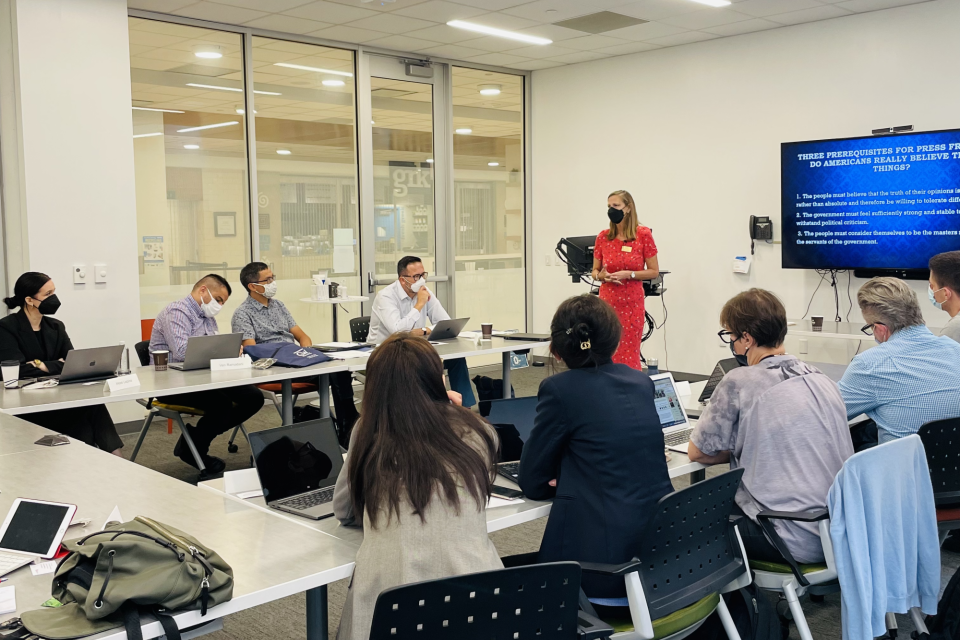 IPDGC Director, Janet Steele presents a brief history of the U.S. press to the Fellows.

Fourteen foreign journalists are now better equipped with knowledge, skills and the networks to navigate the 21st-century media landscape after attending a Distinguished Humphrey Fellowship program on Misinformation and Disinformation organized by the Institute for Public Diplomacy and Global Communication (IPDGC) from September 13-25, 2021.

These senior media professionals from Eastern and Central Europe, Turkey, as well as Uzbekistan and Kazakhstan, discussed issues of common concern in the global news industry - perceptions of reality which are often shaped by competing media narratives - with the George Washington University (GW) academic lecturers and researchers from various United States institutions and think tanks in a weeklong executive course on the Foggy Bottom campus.

The Distinguished Humphrey Fellows were selected based on their potential for leadership and their commitment to public service in either the public or the private sector. The second part of the program was strategic networking placements at various host organizations across the United States.

“The program helped to refresh my mind that people around the world are facing the same media problem in their work. I understood that I’m not alone and renewed my commitment to report more professionally," Daniyar Serikov, a freelance journalist from Kazakhstan said.

At the Center for European Policy Analysis in D.C., Jiri Hosek the Deputy Editor-in-Chief of Seznam Zpravy, the largest non-tabloid news site in the Czech Republic, said he had many helpful conversations “about the dangers that disinformation poses to democratic societies and the importance of medical literacy across the world.”

Stefan Janjic, Human Rights Center in California found that there could be future cooperation with U.S. institutions. Editor-in Chief with FakeNews Tragač in Serbia, Janjic said, “The experience at Berkeley University has greatly opened my horizons regarding teaching models and possible practical activities. Also, I discovered new tricks in the field of data verification, which will help me to improve my fact-checking platform.”

The School of Media and Public Affairs Director, Silvio Waisbord also made an appearance at the Distinguished Humphrey Fellowship program by welcoming the cohort to the University on the first day meeting, and Frank Sesno, Director of Strategic Initiatives held a session on concerns about disinformation that are faced by journalists worldwide.

At the end of the program, the Fellows left for their home countries with a strong sense of shared values and support. Venhar Ramadani, Director of Telegrafi in North Macedonia, said, "After this training, I’ll go home with more information and ideas – knowing that I'm a true newscaster and journalist with the right instruments to be more accurate."

The short-term Distinguished Humphrey Leadership Award is a special initiative of the Hubert H. Humphrey Program, designed to build lasting ties between US citizens and their worldwide professional counterparts. The program is Sponsored by the U.S. Department of State, Bureau of Educational and Cultural Affairs (ECA). -Yvonne Oh, Program Coordinator, IPDGC.