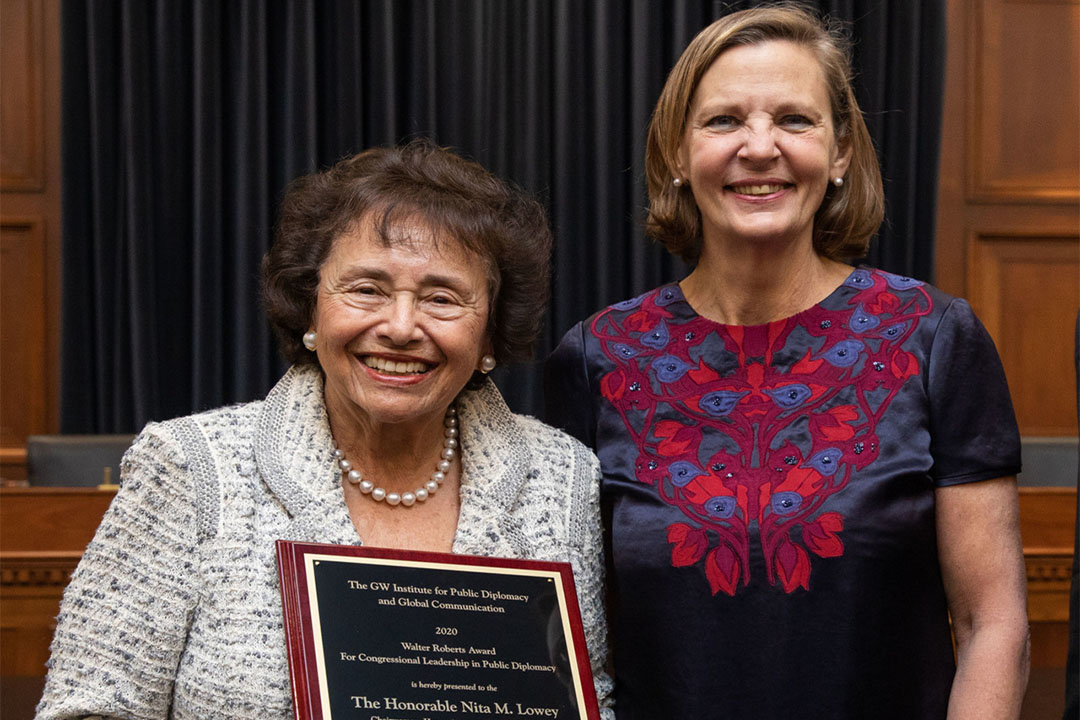 “In today’s interconnected world, our critically valuable diplomatic relationships, cultivated over years of engagement, are needed more now than perhaps ever before,” said Congresswoman Lowey. “I have long believed that our national security is strongest when development, diplomacy, and defense are all well-funded and equally prioritized. That is why I’ve served proudly in leadership roles related to foreign affairs. I thank the George Washington University Institute for Public Diplomacy and Global Communication for honoring me and accept this award not for a job well done, but as a reminder of our shared and ongoing commitment to doing everything we can to build a better world for all.”

“The Institute for Public Diplomacy and Global Communication created this award for congressional leadership in public diplomacy because we wanted to highlight the importance of something that for many Americans is largely invisible,” said Janet Steele, director of GW's Institute for Public Diplomacy and Global Communication. “As Chair of the House Appropriations Committee, Congresswoman Lowey has been a tireless advocate for international education and exchanges. Her fostering of learning and indeed her commitment to education at all levels has helped the United States to put its best foot forward, to lead with our values, and to enhance our international leadership.”

Lowey was first elected to the U.S. House of Representatives in 1988 and is currently serving her sixteenth term in Congress, representing parts of Westchester and Rockland counties in New York. At the beginning of the 113th Congress, Congresswoman Lowey was selected by her colleagues to be the Ranking Democrat on the House Appropriations Committee.

Few members of Congress have taken key leadership roles on so many vital public policy issues. Lowey has led efforts to make our nation and families more secure by better equipping and training first responders as well as ensuring preparedness for pandemics like Ebola, Zika, and avian flu. She has worked to increase health care access and biomedical research and spearheaded the effort to more than double funding for breast cancer research. She has successfully fought efforts to cut funding for public broadcasting and supported fully funding the federal government’s commitment to education at all levels. Because she understands that instability abroad undermines security at home, she is a fierce advocate for increasing developmental assistance abroad on the State and Foreign Operations Appropriations Subcommittee.

Lowey served in the House Democratic Leadership in 2001 and 2002 as the first woman and first New Yorker to chair the Democratic Congressional Campaign Committee. Lowey was born in the Bronx; graduated from the Bronx High School of Science; and received a Bachelor's Degree from Mount Holyoke College. She served as Assistant Secretary of State for the State of New York before being elected to Congress. Nita and Stephen Lowey have been married for almost 60 years and have three grown children and eight grandchildren.

The grant to Battery Dance will be used for dance workshops, panel discussions, and screenings of the film “Moving Stories” at schools in Westchester and Rockland counties in New York.