Finding Success on the Front Page and Behind the Scenes 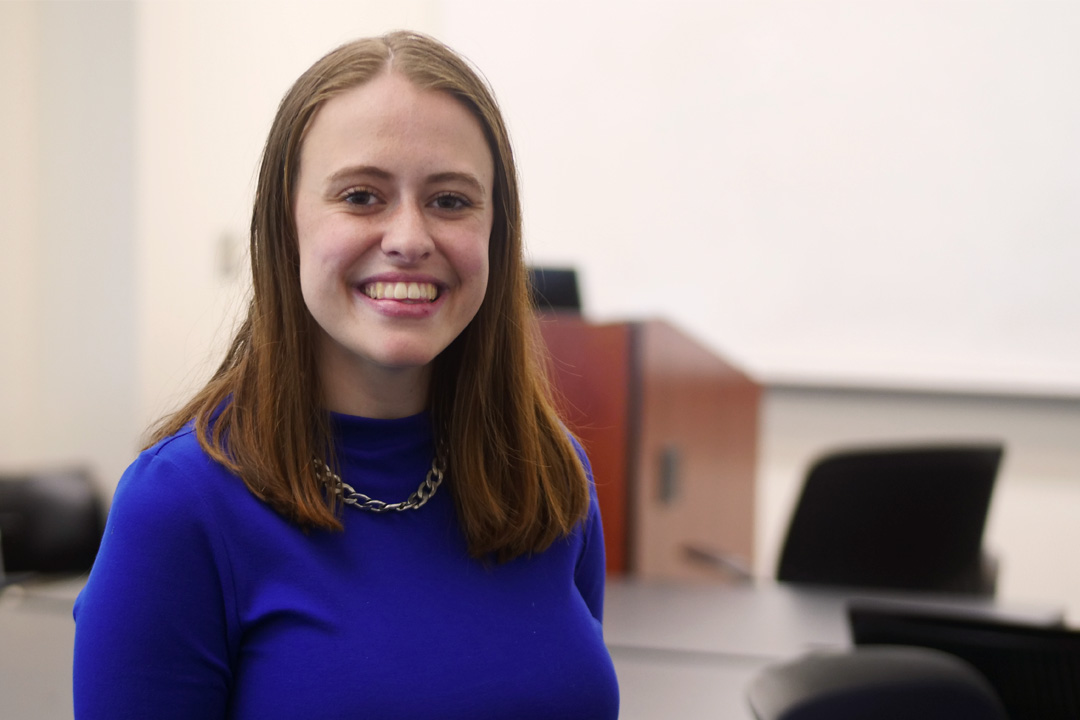 On a warm summer day, one week into her senior year, journalism and mass communication major Justine Coleman walked into a Starbucks with friends to pick up a copy of The Washington Post.>

That's when she saw her name on the front page, sharing a byline with SMPA assistant professor Debbie Cenziper — she was in shock.

SMPA junior Samantha Cookinham asked Justine how she got involved with reporting The Washington Post front-page story “‘Get the Nazi out of New York.’ The secret operation to deport the last living Nazi defendant in the U.S. was a rare success,” the experiences that prepared her for the job and what the reporting process was like for the Post investigation.

Now an intern at NBC's “Meet the Press,” Justine continues to make use of the same research and reporting skills working behind the scenes at the most-watched Sunday morning public affairs broadcast in America.

Justine is the fourth SMPA student to share a Washington Post front-page byline with professor Debbie Cenziper in less than two years. Dual-alumnus Scott Nover co-authored an investigative report on Dec. 17, 2017, and alumni Robin Eberhardt and Lillianna Byington shared a byline with Cenziper on May 7, 2017.

Q: How did your reporting begin on the front-page Washington Post story about the deportation of the last living Nazi defendant in the U.S.?

A: Professor Debbie Cenziper came up with the idea to dive deeper into the story of the deportation of Jakiw Palij, the last living Nazi in the United States.

We wanted to paint a picture of what it had been like behind the scenes for the key players in the deportation, especially the government officials involved.

Professor Cenziper sent me an email on a Wednesday night asking if I could help her report over the next two business days. My summer internship had ended at that point and I was elated to have the opportunity to help.

She called me to flesh out the details, and I spent the next two days calling government officials and other sources to set up interviews.

I was able to schedule four interviews within that time — Rabbi Zev Friedman, who led demonstrations outside Palij’s house; Avi Koenig, one of Friedman’s students; Rabbi Marvin Hier, the founder and dean of the Wiesenthal Center; and Thomas Yazdgerdi, the State Department envoy for Holocaust issues.

After the weekend, I quickly secured an interview with Dov Hikind, a local assemblyman, who had also organized demonstrations in front of Palij’s house. I also received statements from both New York senators after coordinating with their press teams.

Then, I combed through a transcription of a press teleconference with key government officials and press releases from the Department of Justice and the White House for more information about how the deportation actually came together.

I collected email exchanges from our sources about their initial reactions to the deportation. During the writing process, I helped fact-check various points of the rough draft too. 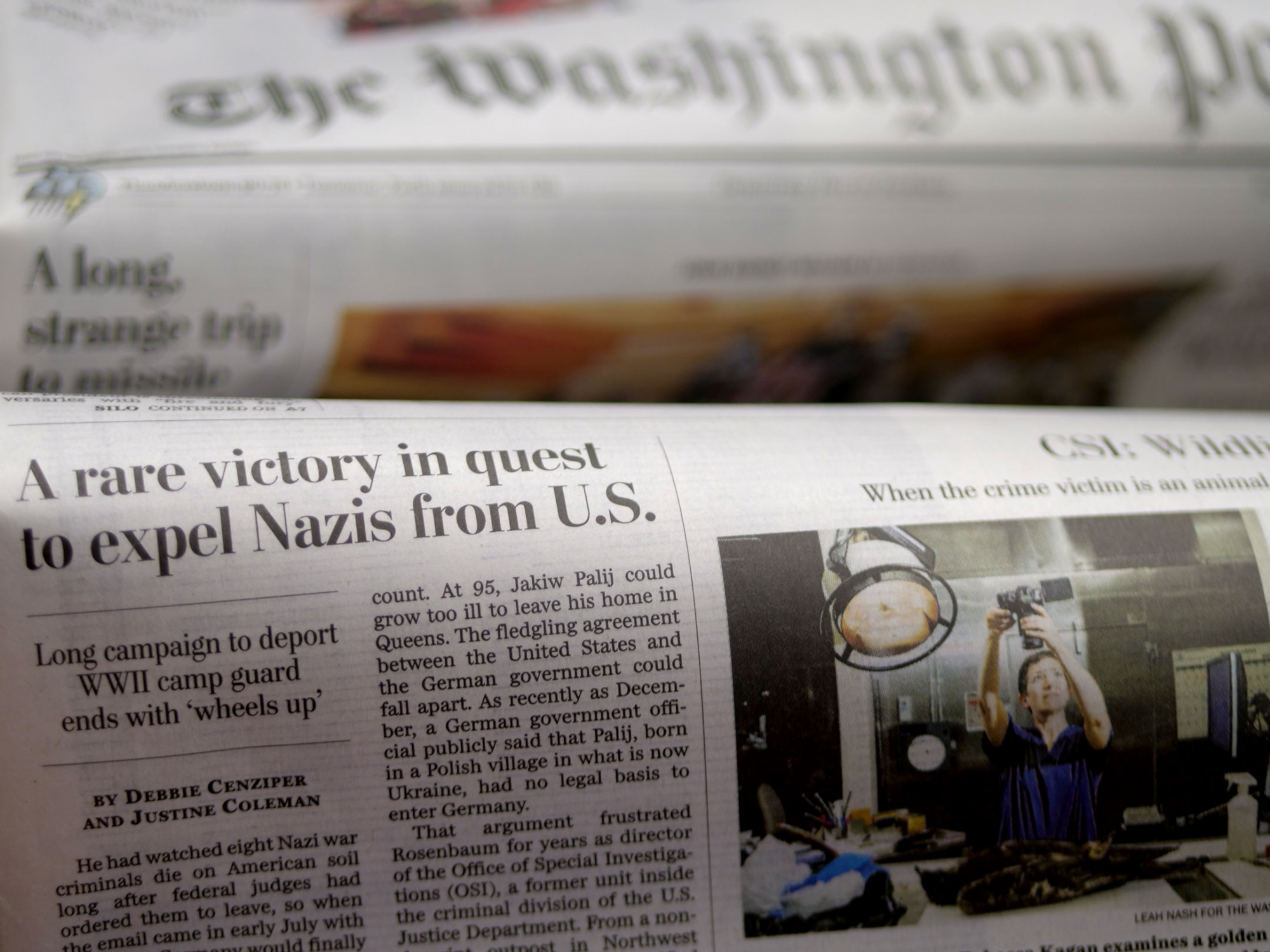 Q: What was it like working with Professor Debbie Cenziper?

A: It was such an honor to work with Professor Cenziper on this story. If you had told me freshman year that I would have the opportunity to contribute to a front-page story in The Washington Post, I wouldn’t have believed you.

I’ve known Professor Cenziper for a year and a half, and I consider her to be a highly inspirational and talented journalist, so getting to share the byline with her was rewarding.

I had Professor Cenziper for two classes: “Advanced News Reporting” and “Big City Reporting.” In the latter course, which focused on deep-dive reporting on local issues, I worked with her on a potential investigative story.

In both courses, Professor Cenziper taught me countless lessons to advance both my reporting and writing skills. Through her teaching, I learned how to approach stories with an inquisitive and determined attitude, how to ask the right questions and how to pursue any available avenues to get in touch with sources.

Most importantly, she taught me how to be persistent and keep pushing to find sources, which definitely came in handy for this project since I needed to push for some of the interviews in a short period of time.

Q: What were some of the techniques and skills you used to report, interview and investigate this story?

A: The first thing I do when I am assigned a story is take the time to get organized and write down everything I need to do and everyone I need to call.

After that, I called the appropriate press contacts to ask them how I could get in touch with a source before the end of the week. If I did not hear back by later in the day, I called and/or emailed again, being politely assertive and describing why we needed their voice in the story.

For this project, I followed up for two business days, scoring interviews along the way.

While conducting interviews, I actively listened while steering the conversation with my prepared questions as I learned to do in my classes, The GW Hatchet and internships.

I made sure to follow up for more details because this story required all of the little information we could get. I also made sure to pass along detailed and organized notes and transcriptions to Professor Cenziper.

Q. What was your reaction when you learned the article would be on the front page of The Washington Post?

A: I honestly didn’t want to get my hopes up until it actually happened. Initially, when I was told I could contribute to a Washington Post article, I was thrilled and thought it was an incredible opportunity that I wanted to take, even if it didn’t pan out.

I actually didn’t know it was on the front page until I went to Starbucks with my friends and my brother to pick up a few copies. Seeing it on the cover was surreal. Some of my friends took videos of my reaction seeing it for the first time, and I just look shocked.

I never thought in a million years that my name would be on the front page of The Washington Post, especially while I am still an undergraduate.

Q. How did your experience at The GW Hatchet contribute to your reporting for this story?

A: The GW Hatchet taught me pretty much everything I know about going about a story.

Most of my reporting experience came from being an assistant news editor for nine months, but I was also an assistant copy editor for a semester and a news and video reporter for two semesters.

In those positions, I learned how to approach stories and balance to-do lists on busy days.

Sometimes, I had to turn around stories in a matter of hours, so working under a two-day deadline for the Post article was not too overwhelming.

Through my work at The Hatchet, I learned how to pursue necessary sources on tight deadlines, which definitely helped me when calling sources for this story.

The Hatchet also helped me become more comfortable and experienced with conducting interviews. By working on so many stories, I was able to master the art of combing for important information in interviews and press releases.

I can say for sure that I wouldn’t be where I am today without that experience.

Q. What was your time like at the Investigative Reporting Workshop and working on other Washington Post stories?

A: At the Investigative Reporting Workshop, I was able to contribute to The Washington Post coverage of the Virginia and Maryland primaries.

I woke up early to be at the polls for the morning rush and conducted man-on-the-street interviews with people about their voting decisions.

Most people didn’t want to talk or were in a rush, so every time I got someone, I considered it a major accomplishment.

I also helped contribute to a database that the investigative team at The Washington Post compiled about unsolved murders in major cities across the country. I followed up on public records requests and coordinated with public records officers to get the information as soon as possible — persistence was always the key.

Q. You’re currently interning at NBC’s “Meet the Press.” What has that been like and how have your past experiences prepared you?

A: At “Meet the Press,” I conduct research and complete the tasks that help make sure the show goes as smoothly and successfully as possible.

My experience working on the article for The Washington Post further improved my ability to spot the most important parts of statements and interviews, which is one of my main tasks at Meet the Press.

As always, knowing how to work quickly and accurately as I did for the article comes in handy at my internship.

I also worked as an editorial intern at Street Sense in the summer of 2017, where I worked on stories about homelessness and affordable housing issues. From that experience, I continued to learn how to piece stories together on a deadline and stay organized in the process.

, full_html, On a warm summer day, one week into her senior year, journalism and mass communication major Justine Coleman walked into a Starbucks with friends to pick up...